Yes, the laws of attraction work!!

I've been a big fan of  missmustardseed.blogspot.com for months.  Yes, join the crowd, I know.  She's such a  talented woman with loads of energy.  I read her blog and think, "I need to take a nap!!"

I saw her dining room set on her blog and fell in love with it instantly.  It became part of my screensaver, I read her blog about it, and dreamed about it as an inspiration for me to become brave enough to redo a set when I found a bargain.  I hemmed and hawed about picking up a dining room set (with two broken chairs), my husband supported me, but I held back and told the shop owner I would let her know the next day.  It didn't feel right and was an enormous project.

Three hours later, I was home, checked Miss Mustard Seed's blog and she had just announced she decided to sell her beautiful table and chairs!!!  Oh, the joy, the excitement!!  After emailing her AND being the first to contact her, they were mine!!  Sometimes, things were meant to be!!!!

We picked them up at the Luckett's Fair.  What an event!!  Make plans to go next year and visit her booth.  Beautiful stuff!! 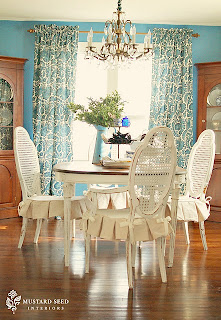 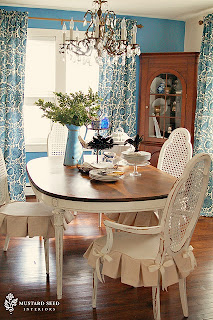 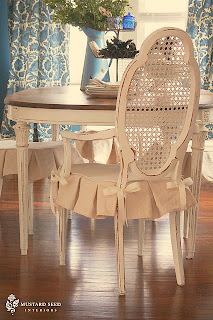 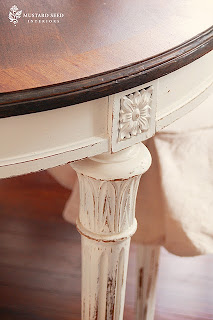 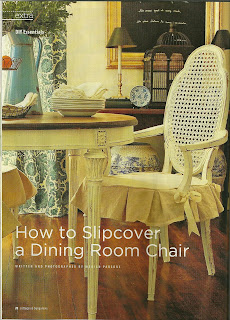 The furniture is now tucked away until our house is finished.  I keep peeking under the blankets to make sure they're still there.  I still can't believe THAT dining room set is mine!!  What a rush!!!  It was on the cover of a magazine.  Look at these great photos!!!
Posted by DownTheLaneWithDaisy at 9:40 PM 17 comments:

I have almost completed a throw for a bed in a bedroom we will have built soon.  The room color scheme is willow green, off white and pretty pinks, from pale to rose!

I ran across a book of fabric samples I had in storage, all in luscious shades of pink.  We've had stuff in storage for about 8 years while moving from New York to Virginia.  When we finally unpack everything, it will be Christmas time, believe me!!!  (I am a confirmed fabricholic, aka fabric junky and I have enough fabric to cover couches from here back to New York.)

I laid out the samples and started sewing.  I had coordinating fabric for the two bands around the outside to make it larger.  I bought cotton batting, at which point I realized it was 74"x 57", between a throw, 60"x60", and a twin, 93"x72".  Next time I'll start with the batting size I want and try to finish the top to match to make it more uniform.

I am posting photos, but need to finish tying the corners.  You will notice little Daisy, who managed to plant herself right in the middle.  Of course, I let her. 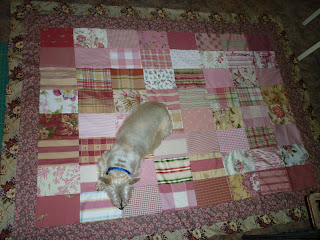 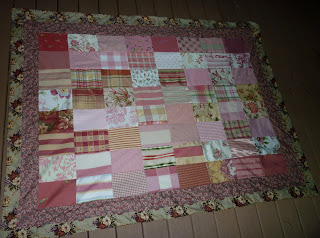 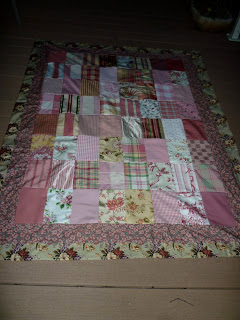 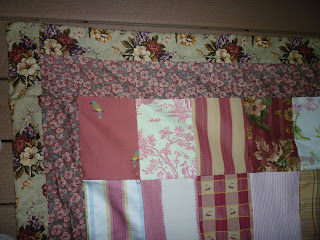 This is my first post and it's exciting.  I love to repurpose things and am always thinking, "What else can that be?"  I'm new at this so I hope I can download the "lamp whimsey" I finished at 11:30pm.  Yes, I ended up with a big mess in the kitchen, but love the results.  I started with an old lamp, the kind we all see at tag sales, brass with the three arms for the bulbs and the top fixture.  I took out the electrical parts and sprayed it with offwhite paint.  I used gorilla glue to affix my cups, saucers, and pitchers to the arms and planted them with sweet potato vine, impatiens, trailing vinca, etc.  It will look better as it grows.  Please notice the hanging teacups on each side; they were too shallow to plant so I put grass and a nest in each one and all they need is a little bird!!  Please bear with the pictures; I'm still learning how to post these pictures and so they are a little "askew", so to speak. 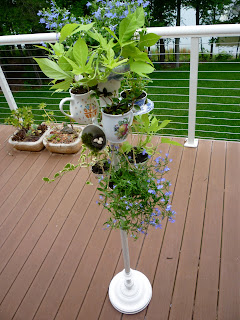 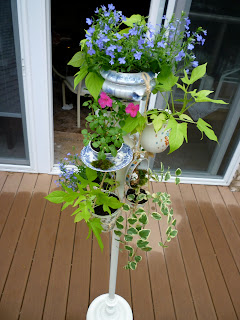 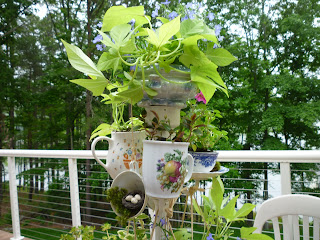 Posted by DownTheLaneWithDaisy at 8:27 AM 3 comments: